It was nearly midnight on my last night in Budapest, and I was perched by a bay window in our room at the Sofitel, where my new husband and I were staying on the final night of our honeymoon. The room had a magnificent view of the Lanchid, or “Chain Bridge”, aglow with golden lights that spanned the Danube river. As I gazed out the window, I felt tears welling up in my eyes.

My father and his family left this all behind when they fled Hungary during the Communist Uprising of 1956. Dad was only 12 at the time, and had no other choice; his own father would probably would have been imprisoned for having resisted the Communists. They escaped in the middle of winter, crossing the border into Austria, where they spent time at a refugee camp. Eventually, they made their way to America, where extended family awaited.

In their new home of Minneapolis, Minnesota, USA, winters were harsh and the buildings weren’t nearly so ornate. Starting from scratch, the family members learned English and adopted new customs. My father did well in school, got an advanced degree from the University of St. Thomas and met an American woman whom he would one day marry. They produced three children: me, my brother Eric, and my sister Ilona. The three of us grew up speaking American English and doing all the things average American kids do: watching The Simpsons, playing video games, and eating too much junk food. My parents divorced when I was 10 and I didn’t see much of Dad after that, but I never forgot about my connection to Budapest.

While my parents were still married, Dad kept a framed postcard of the Lanchid Bridge on a chest of drawers in our living room. The image fascinated me: here was a bridge that glowed with an almost-otherworldly golden light as it spanned a river whose waters reflected the nighttime sky. He rarely talked about Budapest, other than to help me with a grade-school class assignment on the topic of Hungary.

At age 20, I signed up for a semester abroad and — within mere days of arriving in Europe — planned a weekend trip to Budapest. I arrived on an early-morning train from Munich. Exiting to the the train platform, I felt an odd kinship with this city that seemed so foreign. Over the loudspeaker, I heard a woman’s voice speaking a language reminiscent of my father’s conversations with his parents, a language I never learned. Over the next few days, I saw faces that looked vaguely familiar. Perhaps it was the large, almond-shaped eyes, or the impossibly fair skin against dark manes of hair, or the dainty features and sharp chin-lines. Not everyone resembled my family members, of course . . . but enough did to make me wonder.

I came back for a second time four years later, after my father’s death. I stayed for a full week this time around, making friends at a youth hostel. I visited parts of the city which I never knew existed. With each passing day, I grew to love Budapest a little bit more.

I was 32 years old on this — my third — visit. My heart swelled with love for this city so foreign and yet, so strangely familiar. Part of me didn’t want to leave, and I felt compassion for the family members who left this all behind to give their children a better life. And who knew that the children of their children — in this case, me — would return to Budapest time and again; fascinated by a language, a culture, and a bridge that glowed golden?

My father’s family left this behind two decades before I was born. And now — more than a half-century later — I would leave it all behind, as well. Although I had not grown up here, I felt the city’s pulse coursing through my bloodstream all the same. And I would return again someday . . . of this, I was certain. 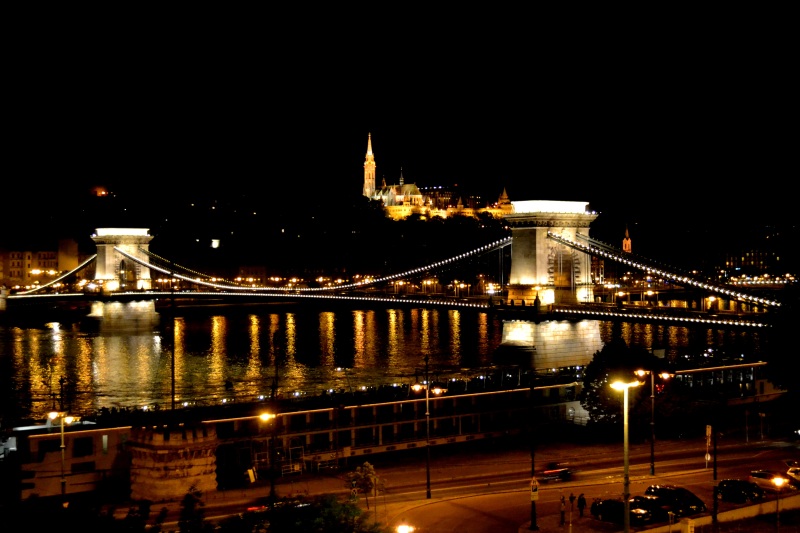 The Lanchid Bridge, all lit up on the Danube River. Mattias Church is visible in the background. 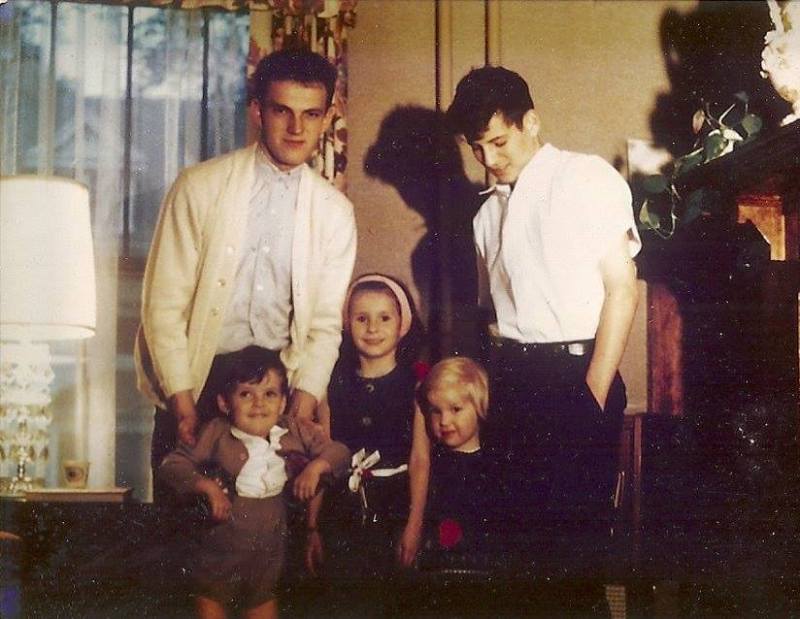 My dad is the one at the top left, followed (clockwise) by his brother Bill, their cousins Kathy and Irene, and his brother Victor.